This site-specific works were created for the duo exhibition (Thomas Kuhn and Line Boogaerts) in an architectural office in Plettenberg, in the frame of the art parcours "gëoffnet" Germany. Organised by 'werkstatt Plettenberg', DE


Nothing is as it seems.
The play with appearances and reality is in the discourse of both artists.
Hard is soft and soft is hard.
Translucent and transparent as glass. In changing light.
There are links between both works, but also large differences.

The glass of the windows is part of the architecture.
Architects draw the window-openings in there plans and so, they determine how the light falls in the space, according to the wish of the customers.

A house is surrounded by an environment, a landscape. Each house is placed in a different context: an urban environment, an natural environment, a slum,… . Inhabitants look, from there own private space, through the window. Line collected all this views from the windows of one building. The openings give a cutout of the landscape. Determines the surroundings and the house you live in, your vision on the world?
She presented a collection of views, parts from a landscape, as a whole.
She works with scale, she incorporates the way architect-plans are rolled up, these are transparent windows ...

The windows of architectural office form the background for a new work of Line Boogaerts. She makes monumental paintings and animations on windows. Line Boogaerts uses windows as a canvas for her temporary paintings.
She takes photographs of the drawing on different times of the day, so that the effect of time and light become visible in the animations.
She wipes away and add pieces in the course of a period and creates moving scenes and actions.
Line will present a pre-recorded movie of monumental drawings on the windows of the architectural office, in combination with animations she made in models.

To better control and stage the different layers, she makes use of large multiple transparent frames after each other in models. She works also with other windows like single-or multilayered film projections.
She insert glass plates in models. On the plates she makes drawings so that several layers are created. She moves these plates, takes a picture and moves them again. She changes after each picture the drawing on the glass plate.

She makes moving drawings with stop motion, with whom she refers to the basic animation techniques of the 19th century. 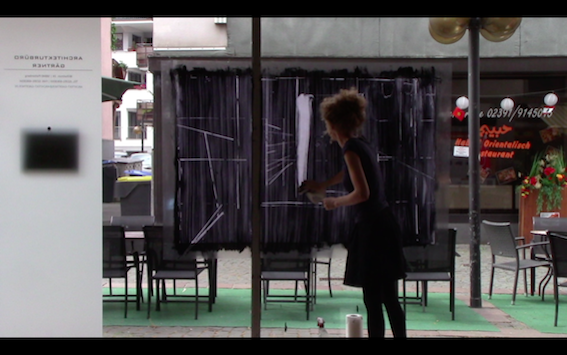 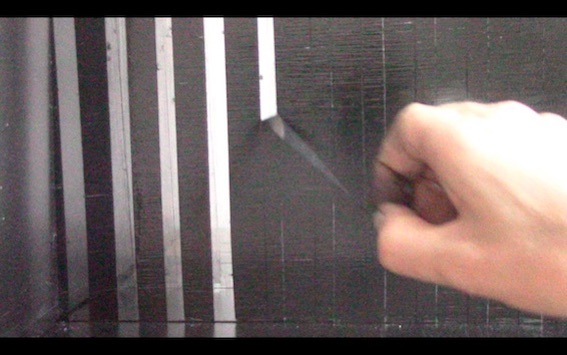